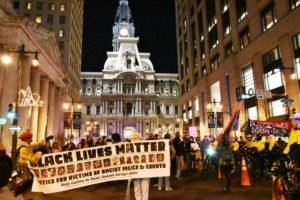 “Philadelphia is a place of resistance,” says Erica Mines, a member of the Philadelphia Coalition for REAL (racial, economic, and legal) Justice. “We are keeping up this legacy.” The coalition is building on the work of past generations, and its battles are linked to a deep history of resistance.

A Future Fund grantee, the Coalition for REAL Justice formed in 2014 in the wake of the Ferguson uprising and the murders of Michael Brown and Eric Garner. It takes a holistic approach to racial injustice by fighting against police brutality, stop-and-frisk policies, mass incarceration, environmental injustice, gentrification, and unfair educational standards.

While the coalition acts as a space for “collective pain, bitterness, and resentment” toward oppressive systems, according to Mines, it also generates collective hope and joy. She hopes that through the group’s work, “Black people can venture out into a better place of freedom — mentally, spiritually, and emotionally.”

The Coalition for REAL Justice has several active campaigns aimed at dismantling white supremacy and encouraging Black resistance. Their #FrankRizzoDown campaign is aimed at getting the city to remove the statue of former Mayor Frank Rizzo, who voiced racist beliefs about Black people, persecuted the MOVE 9 and Black Panthers, and consistently implemented harmful policies in communities of color. Coalition members are also working to hold Mayor Kenney to his campaign promise to end stop-and-frisk and allying with the Stadium Stompers to stop Temple University from further gentrifying and displacing communities in North Philadelphia.

During the Democratic National Convention, the Coalition for REAL Justice spearheaded a March for Black Resistance that garnered much media attention. Coalition members frequently hold rallies and marches to respond to national incidents of police brutality, gathering quickly to uplift victims such as Joyce Quaweay, Korryn Gaines, and Skye Mockabee.

“There are going to be advances that we make,” Mines says, “but for a long time there will always be reason for us to challenge and fight.”