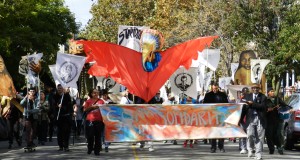 Members of Racial & Economic Justice Fund grantee 15 Now Philly made the news in October when they interrupted Temple University president Neil Theobald at a Board of Trustees meeting and called out jobs at Temple that pay less than $15 an hour. This action was part of a string of more than a dozen protests in the last 18 months pushing for a living wage in Philadelphia.

Urban Creators, a Racial & Economic Justice Fund grantee, unveiled the results of their 2015 Regeneration Project, a collaboration with the City of Philadelphia Mural Arts Program, in October. The closing ceremony featured poetry, live music, and a speech by Mayor Nutter to celebrate the graduates of the program and present the mural that they had worked on for the previous six months.

Over the summer, Opportunity Fund grantee Coalition for Racial Justice (CoRaJus) hosted teach-ins on the topics of gentrification, political legacies, and the state of Philadelphia public schools before and after the School Reform Commission takeover. The goal of the teach-ins was to contribute to the Black Lives Matter movement by making historical connections to the current Philadelphia landscape through popular education.